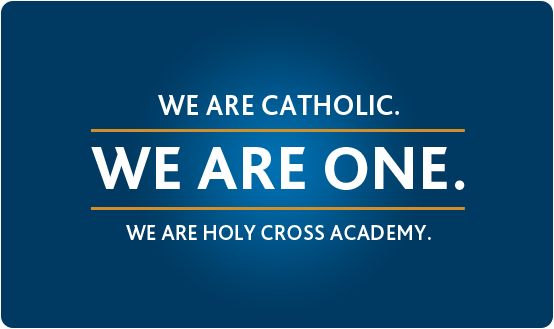 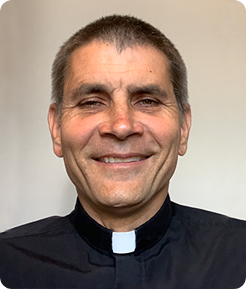 Designated Pastor -
Office of the President

Designated Pastor - Office of the President

Father Michael Esswein, aka Father Mike, felt the Holy Spirit pulling and nudging him into the priesthood as early as Kindergarten. Growing up and knowing a number of older relatives who were priests and religious sisters, he thought the religious life was nothing unusual. In fact, there were many times these relatives impressed him as living lives that were pretty cool. In a second grade play at St. Stephen Protomartyr in South St. Louis, he starred as the priest and was once sold on the idea of growing up to become a priest.

Through seminary, discerning how he wanted to serve God, he pictured himself serving as a diocesan priest and the people of the Church. An automobile accident during his senior year of college left him paralyzed. The first thought he had after the accident when he realized he was paralyzed was whether or not he could still be a priest. He and the Church discovered that it was possible and he was ordained with his class five years later in 1998.

A typical “Father Mike” day entails rising at 5:30 a.m. praying and preparing for 8 a.m. Mass. When Holy Cross Academy is in session, he spends time with the students and may meet with school administrators and the priests of the other Holy Cross parishes. He often joins the students in the cafeteria for lunch and sees them off at dismissal.

As Designated Pastor of Holy Cross Academy, Father Mike works to ensure the success of the school through working with the other pastors, the administration, the teachers, the board and the archdiocese. As Pastor of Annunciation Parish, he visits parishioners in the hospital and prepares parishioners for weddings and funerals. Evenings include being with the students of PSR on Wednesdays and meetings with the parish council, the finance committee or one of the numerous parish and Holy Cross Academy volunteer and social organizations.

Father Mike most enjoys being with people and feels blessed to become a part of many families during good and bad times. He also counts his blessings for a strong family, growing up in South City as one of seven children who were close as youngsters and remain so today. In his rare free time, he enjoys family dinners on Sunday evening. 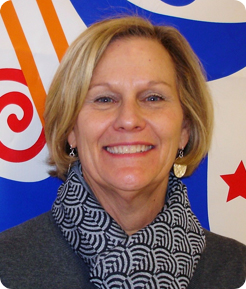 Janet Dolan has spent her life devoted to educating students in Catholic Education. Her long tenure teaching children in grades 6-8 and working as an Assistant Principal prior to joining Holy Cross Academy have contributed to her impact in developing our unique middle school experience for our students. The hallmark of the Middle School experience is the elective program that enables students to explore subjects that are of interest to them and to cultivate new interests.

Janet loves the community feel of HCA and shared, “At Holy Cross Academy, our students are wonderful. They are adolescents with all that brings; but they are respectful and say yes to good opportunities and are kind. The parents are involved and supportive.” Janet and her husband Dennis have two daughters Jennifer (Brad) and Kelly (Joel) and three grandchildren, Charlie, Dennis and Wesley. When Janet is not supporting her teachers and students at HCA, you can find her spending time visiting her grandchildren in Chicago and Indiana, reading, attending the theater and watching sports and movies. Janet is an active parishioner at St. Clement’s Parish.

Karen Folk spent the first part of her career in corporate America before following her heart to education. Serving students in St. Louis City and now at Holy Cross Academy has fulfilled her passion of inspiring our elementary students to become life-long learners. Being a principal created the opportunity for Karen to live her personal mission of educating children academically, socially, physically, and most importantly spiritually.

Karen shared, “At Holy Cross Academy, we invite our students to have a personal relationship with Jesus and to understand the role of faith in one's daily life through participating in our faith community. I love Holy Cross Academy’s unique model where multiple communities work together as one and collaborate to ensure the development of the whole student. We individualize the needs of each student.” Karen and her husband Michael have three sons, Zachary (Leah), Alexander and Matthew. They also have two dogs named Jade and Piper. Karen is an active parishioner at St. Margaret Mary Alacoque. 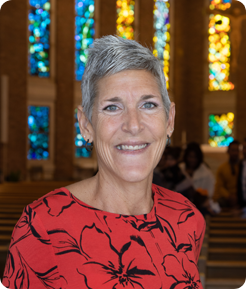 Our Lady of Providence

Stephanie spent the last thirty years working in the Affton and Bayless school districts to create innovative learning environments for students. Starting out her career teaching fourth grade for twelve years, Stephanie enjoyed working with each of her students to understand the way that they learned best while helping each student cultivate a true love of learning. As an administrator in both Affton and Bayless, Stephanie was able to use her classroom experience and education to create Professional Development and Instruction programs to help other teachers develop and grow.

Stephanie feels called to bring the best in Catholic Education to our students and is excited to work with the rest of the administrative team to, “build an incredible learning system for the students of Holy Cross Academy.” Stephanie and her husband Rich have four children: Cindy, Jennifer (Sven), Christopher (Erin) and Emily. They also have a granddaughter, Lucy, and another grandchild due this summer. To round out the family are a dog named Cooper and a cat named Spike. When Stephanie isn’t working as an educator, she can be found playing with her granddaughter, running outdoors and reading. Stephanie is an active parishioner and member of the parish council at Seven Holy Founders Parish. 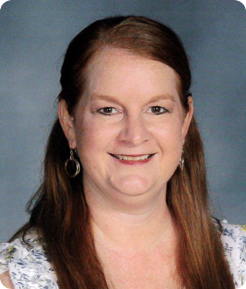 As Director of Early Childhood Education, Angie has created the unique learning environment for Holy Cross Academy’s youngest learners that provides excellence in faith-based education in a loving environment. The creation of our new early childhood program is bringing a dream of Angie’s to life as our preschool students and their teachers come together under one roof in a space created for little learners.

Angie loves working at Holy Cross Academy because it “provides an extended family to staff, children and parents and is a community like no other. Catholic education gives us the ability to share faith and pray together at any time, not just on a Sunday morning.” Angie and her husband Marc have three children, Nathan, Cara and Drew. When Angie is not supporting our preschool teachers and students, you can find her enjoying photography, attending the theater, watching movies and attending her sons’ volleyball games. Angie is an active parishioner at St. Michael the Archangel Parish.